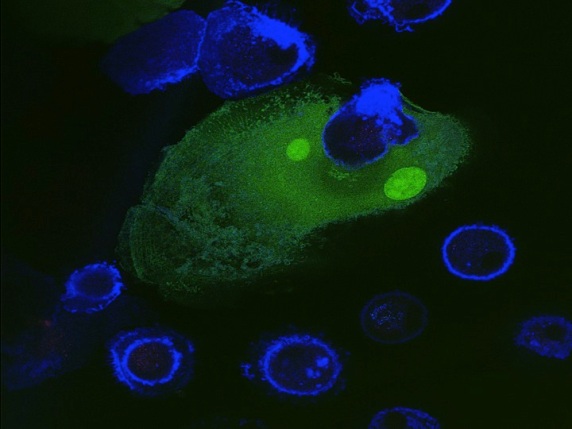 HIV infection remains a worldwide epidemic for which there is as yet no cure or vaccine. While current treatments effectively suppress HIV replication, they have no impact on established tissue viral reservoirs, which can quickly reignite viral production when drugs are halted.

It is estimated that 50% or more of HIV-infected individuals experience the comorbidity, HIV-associated neurocognitive disorders known collectively as HAND. Our research is focused on how chronic low-level viral replication stimulates pro-inflammatory signaling in the brain and as a result, induces cellular activation, initiating a cascade of events within the central nervous system (CNS) which leads to synaptodendritic, axonal, and neuronal injury.

Osteopontin (OPN) is a cytokine first identified as early T-cell activation marker 1 and appears to be a first responder in the inflammatory cascade in T-cells. OPN is also expressed by other cell types including macrophages. Interestingly, OPN is upregulated in several neurodegenerative disorders including HIV-associated neurocognitive disorder (HAND), suggesting that there may be shared molecular mechanisms leading to OPN dysregulation. However, the role of OPN in these pathogenic processes is not understood.

We recently showed that in HIV-associated neurocognitive disorder, OPN is elevated not only in microglia and macrophages in the brain, but also in cortical neurons. These findings suggests that OPN signaling persists in a chronic fashion with the severity of impairment. The long-term impact of excess OPN in the brain is currently not known. We are using in vitro culture models to investigate the impact of OPN levels on HIV-mediated neurotoxicity.  We aim to use more physiologically relevant mouse models for HIV infection to determine the contribution of OPN signaling in HIV-induced neuronal injury. Additionally, through in vivo and in vitro studies and the use of autopsy tissues, we aim to identify the signaling pathways within cells of the CNS which are regulated by OPN and play a critical role in the disorder.